Testimonial of one of our members here at Le Chéile, Noirín De Barra, who has been battling depression and bipolar disorder for almost 24 years now. This was originally published in the Limerick Leader on the 25th of July 2016, by Fintan Walsh. Noirín hopes that by sharing her story, she can help others to realise that they’re not alone in dealing with their mental health issues.

“I really should be another suicide statistic. I really don’t know how I survived.”

These are the words of Shannon Banks woman, Noirín De Barra, who has been battling depression and bipolar disorder for 23 years.

The three-page journal entry, which she read out to this reporter, details her experiences at the acute psychiatric unit, 5B, at the former Mid-Western Regional Hospital (now University Hospital Limerick); family troubles; and how she overcame the “darkness”.

Where it all began

When the Limerick woman was admitted to 5B in the early 1990s, she had “latent feelings inside all the time. It was a curse. I was afraid to voice my opinions for fear that the men in white coats would lock me up, away from my beloved children. I missed Christmas with them, and I also missed my daughter’s Confirmation. I was devastated. It was the loneliest day that I ever put down in ward 5B,” she wrote in the journal.

As well as the “insurmountable” guilt she felt in the ward, she grew tired of repetitive questions pressed by psychiatrists and doctors.

At the age of 24, Ms De Barra’s first husband died by suicide, which was followed by the death of her youngest, 18-year-old sister, she wrote.

“My two children were only toddlers. I needed guidance. I had a nervous breakdown. I then saw a psychiatrist privately that and was well almost immediately. I went back to work and cared for children. In 1990, I remarried. From the start, I suffered panic attacks and poor mental health. I’d say I was in a deep depression for three years.”

Noirín, who now does creative writing as a hobby, said that she was in and out of 5B “several times in later years, but always bounced back and went out to work”, and started seeing a new health professional in 2013.

She said that a family doctor, who visited her on one occasion at 5B, sat with her in the foyer of the Dooradoyle hospital and asked her: “Noirín, where do you see yourself in five years’ time ?”

“Strange question, I thought to myself, but I had a fast answer for him. I said: ‘I will be writing [about this] in five years’, and as I write this down tonight, I can feel the latent frustration, angry, guilty feeling like a second class citizen, flow out of my body and I am feeling content and quietly relaxed,” she read out, in a quiet office on O’Connell Street.

However, she said that there were positive experiences during her time in the acute psychiatric ward.

“The one plus for ward 5B were the patients. We counselled each other, and some of them have remained good friends. The camaraderie we shared inside; we helped each other through hard times, and the nurses spent most of their days writing notes on us. We had fun, too, out there at times, despite everything.

It can happen to anyone

“So why should there be a stigma against mental health? Isn’t the brain part of our bodies? It needs mending at times. And nobody can throw a stone — it can happen to anyone, no matter what creed. Why are we segregated, why are we alienated, and why are we not more integrated into society? We have feelings that hurt the same as everyone else. All that we need is for someone to listen to us,” she wrote.

Since September, Noirín has been attending sessions at Grow mental health services, on Henry Street, and Shine services, in Ennis. She said: “They have helped me so much since I started”, adding that people should not lose faith in local mental health charities, following the revelations of the Console scandal.

“I have now found a way out of this darkness and depression. I joined Grow last September, and it has been the making of me. I speak my mind at these meetings. It can sometimes be emotional, but our group is a loving, caring group who look after me.

You can come out of depression

“ I have made lots of new, genuine friends. I no longer beat myself up over things, or feel that awful guilt. I find I can be emotional like everybody else, and also be happy, without fear of being judged.”

She concluded: “Bipolar, yes, it is a curse. But you can come out of it a whole and beautiful person.”

What’s On at LMHA this Jan 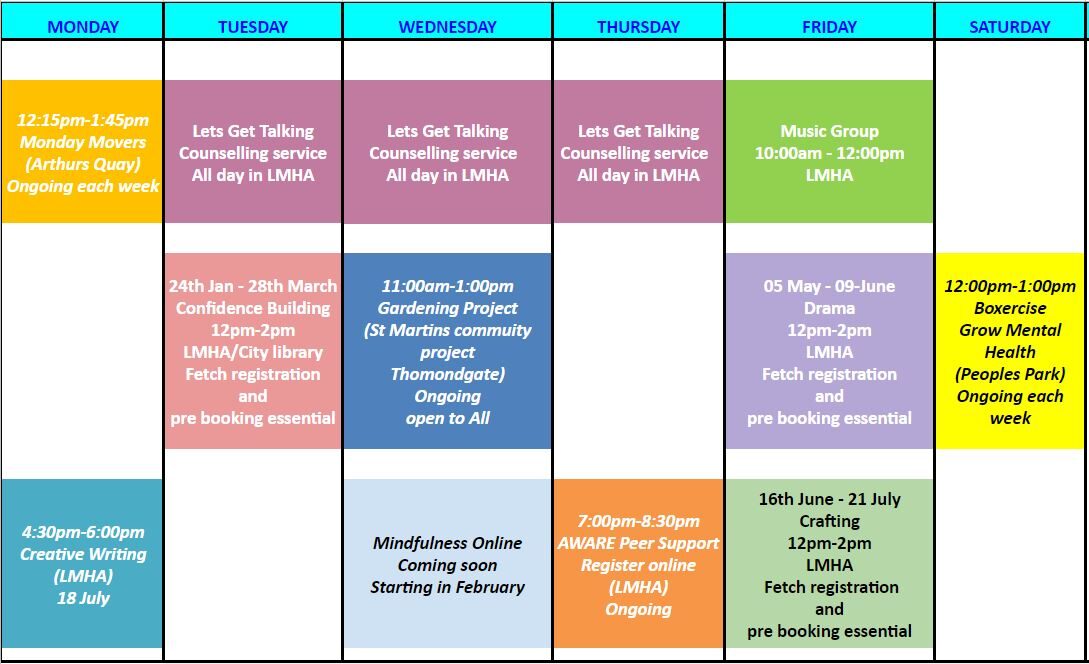